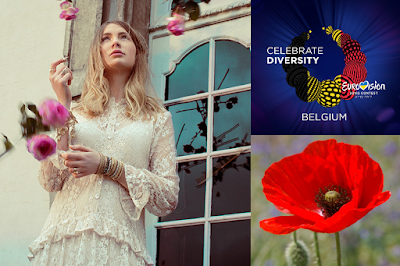 Pictured is the national flower of Belgium, poppy


Belgium's French speaking television is in charge this year and as usual selected internally their artist. This time it's Blanche, yet another artist for The Voice Belgique. Her song City lights was also internally selected among the songs she was working on for her debut album. It's written by Pierre Dumoulin and Blanche herself.

Ellie Delvaux (17) aka Blanche for the artistic life. She entered The Voice Belgique last year but unlike previous Eurovision starts Roberto Bellarosa and Loic Nottet she didn't get that far in the competition, but her special dark voice left a mark. She won't pass unnoticed at the Eurovision either for sure and with some luck might have an international hit in her hands.

I have to stress again I'm writing these reviews mostly before the live performances in the promo events. It seems the fans have been a bit disappointed by Blanche's stage presense and vocals, but even if I repeat myself: the only two performances that matter are the jury final and the live broadcast. So she has all the time in the world make it work in Kyiv and get those points rolling in. I loved this song since the first hearing. Her voice is very special and very French. I'd love to hear this one in French really! Mysterious, haunting yet catchy and atmospheric and even radio friendly. A weird combo that works. Maybe not an Eurovision winner in the end but one of Belgium's finest ever for sure. 9/10