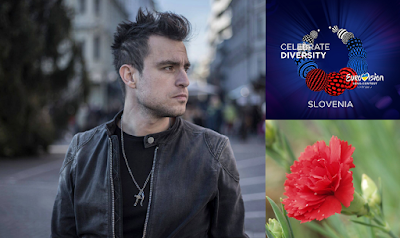 
Slovenia organized as usual its national selection EMA with two semifinals and the final. 90 songs were received and 16 were chosen. After that previous winner Amaya aka Maja Keuc withdrew and was replaced. She had other career opportunities and decided to go for that. Other previous winner Omar Naber, who represented the country already in Kyiv's frst time in 2005 will return this time with self-penned On my way. He won his semifinals both televote and the jury vote, but in the final he won the juryvote but was second in the televote to teen heartthrobs  BQL.

Omar Naber's (35) father comes from Jordan but is Slovenian born and raised. His career started from a talent show, and then he was hot and in Eurovision. He failed to make the final but he's been around ever since. Four albums to his credit, one of them also in English and several attemps to get back to Eurovision (2009, 2011 and 2014 plus 2016 for Switzerland). Now he's back. Will he reach the final this time?

This song is so underrated by the fans for reasons I have no clue of. Or is it only because it's a stylish classic ballad instead of some plastic europop? I may have preferred the original less boombastic and more night club grooner kind of version but this is a fine song. If it's "only" 19th in my list it's only because there are so many good songs ahead but I like this. A lot. I never liked that much Stop but this one's great. Things back to classic Eurovision with real orchestra and all that. I'm so hoping this qualifies against all fanboys predictions :-) 6/10 from me due to the scale but it also could be more.....