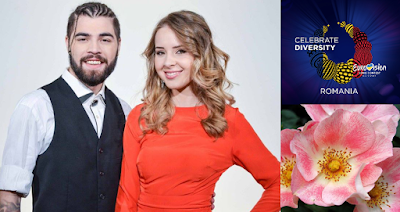 
Romania returns to Eurovision after one year break - last year EBU disqualified them over unpaid debt just weeks before the final - and TVR organized a national final and open submission. They received 84 songs and after live auditions 15 were chosen for the semifinal. Ten songs were selected by a jury to the final and Yodel it! got full marks from all of them. In the final it was televoting and they scored twice the amount of the votes of runner up, Eurovision veteran MIHAI. The song is written by Mihai Alexandru and Alexandra Niculae.

Maria Ilinca Băcilă (18) has tried already them all: Romanian The Voice, Romania's Got Talent and X Factor (in Trupa Quattro) so her yoggling is already well known for Romanians. Alexandru Ionuț Florea (25) is also known from The Voice in Romania. Now they will bring their joint yodel meets pop meets rap combo to Eurovision and anything can happen....

When this song was presented as the pre-contest favorite I listened and chose to ignore it as I had other favorites in the running (who didn't even make the semifinal tbh). However it felt like a fact this would win no matter what. Time to relisten it and to my great surprise I kinda liked it at first, then a bit more. Watching the live performance it's really Alex's foot stomping energy that drives the song ahead. Now it's right in the middle of my chart. One day it's higher, the other a bit lower but it's a good addition to the line up and a fun entry. 6/10 for now.