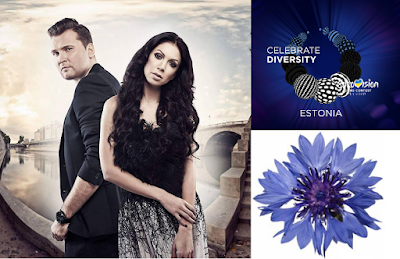 
A recordbreaking 242 songs were submitted to the annual Eesti laul, 20 were selected for the semifinals, including a string of previous Eurovision veterans (Ivo Linna, Elina Born, Lenna Kuurmaa, Laura, Koit Toome). Ten songs made it to the grand final in sold out Saku Suurhall. In the end veterans Koit & Laura won, after a rocky road: in the semifinal the jury placed them only 5th, televoters 2nd. In the final's first round the jury kept pushing them down, now only 5th but they won the televote getting double the votes of runner up Kerli. Three songs made it to the superfinal where only televote ruled and they took a convincing victory (55%)  and slapped the jury's face with Verona, written by another veteran, Sven Lõhmus.

Koit Toome (38) started his career in a hit duo Code One before going solo with Eurovison 1998 and Mere lapsed placing 12th. Since then he has released albums and singles, won Dancing with the stars, dubbed animated films, done countless musicals. His uncle was the prime minister of Estonia, and he's to become father for the second time later this year.
Laura Põldvere (28) started her career in Eesti laul 2005, where she won with the girlband Sunstribe (and finished 20th in the semifinal, her solo would surely have done better ->). But she also came 2nd with her solo Moonwalk. Two years later she came 3rd with Sunflowers. In 2009 she was again 3rd with Destiny. And last year 2nd with Supersonic. She has studied music in Berklee Collage in Boston and has released two albums (plus one compilation) so far, and over a dozen of singles.

If you haven't already guessed I adore Laura! Verona might be only 6th at this ranking but it also could be 2nd as the top is so even. I love Laura's voice, and Koit has his charm, too, and is a familiar name to this blogger and they work well together. The song is a weird mix of old and new, 80's dress and beat, 90's Europop, drama and nonsense but it works. It's incredible catchy and I want to believe whatever they are trying to tell me. One of the few songs this season I heard before the national finals I thought must win and do well in Kyiv. 9/10