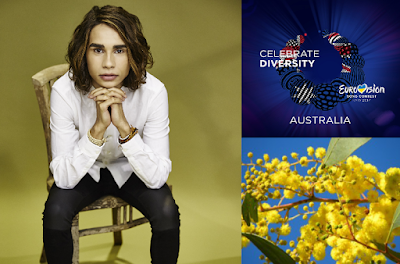 Pictured is the national flower of Australia, golden wattle

Australia has once again chosen internally and this time it's X Factor winner Isaiah. His song Don't come easy is his second single and is written by Anthony Egizil, David Musumeci and Michale Angelo, who also wrote last year's Eurovision song contest runner up Sound of silence.

Isaiah Firebrace (17) is of aboriginal roots and he won the 8th Australian X Factor last November, mentored by Adam Lambert and his debut single It's gotta be you charted already in various countries, including Finland, Denmark, the Netherlands and Sweden. In December he released his debut album and now he's ready for the Eurovision adventure. Considering Australia has placed 5th and 2nd the pressure is on him....

When Isaiah was announced I was thrilled, I was hoping it all along ever since I heard It's gotta be you, that I love and it could have been also good for Eurovision. The initial reaction to Don't come easy was a slight disappointment, even if it's great. I adore his voice, and he's got something. The song could be live a bombastic ballad with the right staging and flawless vocals. I'm afraid he won't match the previous two years maybe but a Top-10 is well to be expected. 8/10