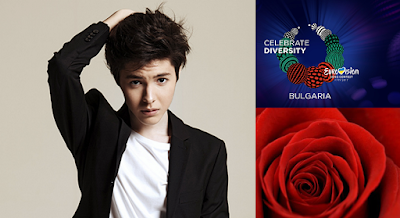 Pictured is the national flower of Bulgaria, rose


Bulgaria returned to Eurovision last year after a break and scored their best result to date. Therefor they are using the same success recipe this year: internal selection for the artist and then finding him an international hit song. And they got the youngest artist of the year, barely 17 year old Russian Kristian of Bulgarian and Kazakh origins. Last year's succesful songwriters Borislav Milanov, Sebastian Arman, Joachim Bo Persson, Alex Omar and Alexander V. Blay have written Beautiful mess for him.

Kristian Kostov (17)  has already done The Voice Kids Russia and X Factor Bulgaria. In Kids he was mentored by Eurovision winner Dima Bilan and he reached the final. In X Factor he was the runner up. Born in Moscow he is fluent in Russian, Bulgarian and English. As a recording artist he has released one solo single and has been featured in vocals in another.

If Macedonia is the song that has moved down the most on my list this is the one that has went up the most. Well produced with some originality in the arrangement, well sung and catchy enough this wil go far in May. He might even beat Poli's last year's 5th place now if the Russian dispora votes are aimed at him instead of missing Russia. Despite his age he's very convincing and I do enjoy the song everytime I hear it. Hopefully it won't be ruined with overpowering staging. This is 12th in my ranking but the then again, in my top-12 the songs are quite even... this could as well 5th.  9/10. Check out the music video after the jump....