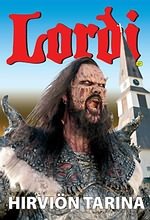 Mr Lordi is very angry. Again. After the T-shirt adventures in Tallinn (scroll down) he picks up the book "Lordi - hirviön tarina" (Lordi - the story of a monster) written by Sven Pahajoki and published a couple of weeks ago. Its first print of 20.000 has already sold out.
"I have given a 15 minute telephone interview to the writer" says Mr Lordi "and then he added newspaper articles and stole pages from our website, including several interviews word for word, and so on. Lordi has nothing to do with the book and we never authorized it. Yet it has been marketed as an "official" book. He is only after the money!"
The official Lordi book will be published in November. "When we do something we do it properly" says Mr Lordi. "This book will have a lot of new material and facts are right. Of course I am also upset about the financial factor."
Lähettänyt Ilkar Blogilkar klo 16:44 No comments: 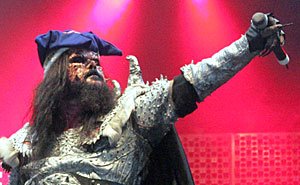 Lordi has made its first million euros, it was revealed the other day. The album has sold worldwide over 300.000 copies and the single as many, 150.000 in Germany alone, where Lordi performed last weekend in a TV-show called "The Dome 39" in Leipzig. A private plane flew them back to Helsinki where they made the crowd wild once again in "The Voice 06" open air concert on Saturday. "It has been busy, we have had to use a private plane several times this summer" says Mr Lordi, "but my favourite is a 24 hour tour earlier this summer when we performed in 3 different countries in 3 different corners of Europe!" When talking about money he says: "People think we are millionaires but the sad truth is I have a few hundred euros in my bank account and last time I was at home I saw a re-sent phone bill I haven't been able to pay! It will take time before the royalties from record sales and radio play start to roll in..."
Lähettänyt Ilkar Blogilkar klo 16:27 No comments:

It looks like the Lordi movie will be done. The first script is ready and the band members are more than willing to star in it. It is written by Pete Riski (who has directed all Lordi videos) and Mr Lordi himself, while very experienced producer Markus Selin is looking for the money to finance the movie. The schedule is very tight as they want the movie to be ready for next May's Eurovision. "All must be clear by October so we can be ready for May" says Selin, "and after that the target is abroad. It is not going to be for the Finnish market only, and it is not going to be a children's movie but a real horror movie. A horror movie, not a musical!"
Lähettänyt Ilkar Blogilkar klo 16:20 No comments: 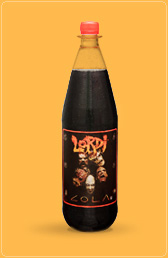 Another addition to the endless string of Lordi products. Finnish brewery Olvi will soon bring onto the market Lordi Cola, the Finnish answer to Coca and Pepsi in various tastes. The labels will of course feature the members of Lordi and will be designed by Mr Lordi himself. What will Pepsi do now? They adapted "Hard drink Hallelujah" for their advertising in Finland already before Athens... ?!
Lähettänyt Ilkar Blogilkar klo 11:55 No comments:

So here it is. The first dance cover version of "Hard Rock Hallelujah" coming from Italy, where else? The country of dance versions of just about everything! Weak female vocals repeating endlessly the chorus over a weird dance rhythm under name Frodo United.... Does Mr Lordi know? Or is it like the T-shirt business in Tallinn?
Lähettänyt Ilkar Blogilkar klo 00:01 No comments:

The Arockalypse drops to number 4

Lordi didn't make a new record after all. After being number one for 11 weeks the album dropped to number 4. One more week and it would have been sharing the record of the longest running consecutive number one album of all time...
Lähettänyt Ilkar Blogilkar klo 23:53 No comments:

Turku may have lost the ESC 2007 but the Finnish final will take place in Turku's Caribia once again. The ticket selling for the February final will start in October and as with last year the 12 finalists will perform their best song from the semifinals.
Lähettänyt Ilkar Blogilkar klo 23:48 No comments:

Mr Lordi got finally married last Saturday in Rovaniemi. The wedding, originally planned for May and postponed due to the gig in Athens, was celebrated under heavy security and no pics inside the church were leaked to the public. The wedding celebration was held in the Santa Claus Hotel where most of the guests also stayed. Congrats Mr Lordi and ... err... Mrs Lordi?
Lähettänyt Ilkar Blogilkar klo 23:39 No comments:

UPDATE:
Who's Your Daddy scored another no 1 hit in Finland for Lordi! 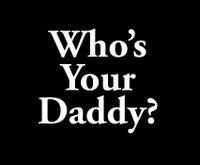 Lordi's follow up single is out! The album "The Arockalypse" is still steady at number one for the 11th week and a total of 22 weeks so far. Also their debut "Get Heavy" stayed in the charts for 22 weeks, peaking at number 3 and re-entering the midprice charts for an additional 10 weeks, hitting number one. The second album "The Monsterican Dream" didn't do so well: only 8 weeks and peaking at no 4. The re-issued midprice stayed 2 weeks, peaking at no 2.

"Hard Rock Hallelujah" was their third number one single. It stayed in the charts for 12 weeks (and would have stayed much longer but it was sold out and never reissued!), while their first number one "Would you love a monsterman?" had an amazing run in the charts: 28 weeks! "My heaven is your hell" hit number one with only 4 weeks in the charts. Other singles "Devil is a loser" stayed 5 weeks, peaking at no 9, and "Red blood sandman" only no 17 and 2 weeks. Let's see how it goes for "Who's your daddy?"
Lähettänyt Ilkar Blogilkar klo 19:50 No comments: