Second Big5 to get treatment by The Bicycling reporter Robert is the Spanish group El Sueño de Morfeo, nicknamed ESDM for this Eurovision adventure. Raquel (vocals), David (acoustic guitar) and Juan Luis (electric guitar) form the band. Eurovision. Canarias. Asturias. Sanremo. Latin America. Luca Barbarossa.... It's all here. And who would they sent to Eurovison next year for Spain? 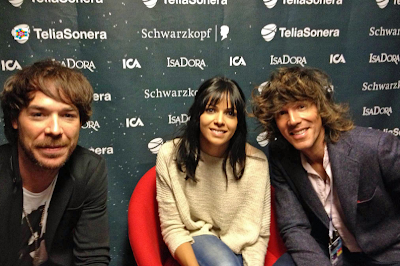 Robert: Hola ESDM! Thank you for this interview. What does your name mean?
David: Morpheus brings dreams to people. We liked it as our dreams to make music came reality!
Robert:How long have you been together? And how did you meet?
Raquel: Ten tears already. I first met David in my country, in Canarias....
David: ...I told her to come up north where we are from, Asturias....
Robert: Did you have a relationship...
David: Yes! ha ha ha. You're a good detective!
Robert: That's how it usually starts, ha ha ha! So you went up north. Is that still your base?
Raquel: Yes, we live in Oviedo.
Robert: What is the place for you to make new music, is it up there?
David: Yes, for sure. For me it's a little village, Salinas, by the coast.
Robert: So you really go to the quietness to compose?
David: Yes.
Robert: And do you write music all three of you together, jamming and....
David: Yes, we start with some musical ideal and then start writing.
Robert: Are you also open for some musical collaborations and if so, with whom?
Raquel & David: We love collaborations! We released our last album only two weeks ago in Spain, we remade some of our songs with other singers from Italy, Spain, Latin America... it was a big dream to do that!
Robert: And one of them is Luca Barbarossa? He did Eurovision, too, did he give you any advice?
Raquel: Luca! Yes! He recorded a little video for our song selection show. He's so sweet. Always!
Robert: Are you going to work with him again?
Raquel: I hope so!
Robert: And you have done Sanremo with him, too?
Raquel: Yes, I did! (In 2011. Ed.note)
Robert: And what have you planned for the future after Eurovison.
ESDM: We just relased this new album and will tour Spain with it, Latin America later this year, in November-December.
Robert: Do you have any Spanish Eurovision favorites?
ESDM: Bailar pegados by Sergio Dalma...  Massiel's La, la la.... Eres tu....
Robert: Who would you like to see in Eurovision 2014 for Spain?
Raquel: I don't know... maybe a band like us?
David: This is an experience we recommend to our collegues! We have done some big stages, but this... wow...
Robert: Who would you call first, telling you must go!
David: Well, Alex Ubago and La Oreja de Van Gogh, two very different names. But they'd be good!
Robert: Ok, thank you very much and good luck on Saturday!