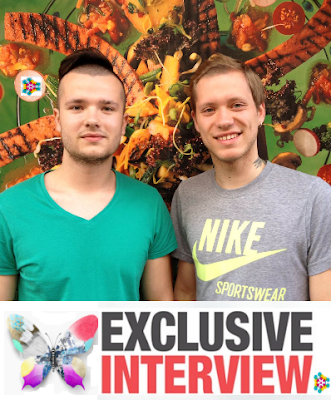 Here we go! Next act to get the Bicycling reporter Robert's in depth treatment are the Latvian boys of PeR. They talk beatbox, spanking, their continuous presence in the Latvian selection, jazzy songs in Eurovision, how sporty can you be if you only read about it and watch it? And how fast driver Edmunds really is? How about the dive? What's the main idea behind their act? And they drop names for next year like if they have given it a serious thought! Read it here: (Ralph is doing most of the talk unless marked) 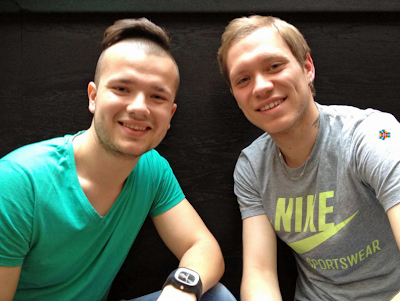 PeR! Here we go. Ralph is the blond one and Edmunds is the dark one, right?
Yes!
Could you describe the style of music you play and explain the name of the band....
Our music style is basicly everything with beat box. Even if we have a fast song like Here we go in Eurovision it doesn't mean all our songs are like that. We have released our debut album and there are different songs in it; some of them are alternative, some ore indie, afrobeat, pop. We mix a lot of genres with beatbox. Our name PeR in Latvian means spank....
So you like spainkin? or do you like to be spanked?
Ha ha ha.... err, no. In English is stands for Please Explain the Rhythm. In the beginning it was P.E.R. as Peters, Edmunds and Ralph but when we became a duo we thought Please explain the rhythm is a good explanation as we do beatbox.
So the P left the band?
We decided we had to go different ways. PeR is too small for the P. Ha ha!
So do you both beatbox?
Edmunds does the beatboxing now, he does it better and I'm is just singing.
You have  participated in the Latvian selection already four times. One can come to the conclusion you really want to do Eurovision. Why?
The first two times different songwriters gave us their songs and said we should do it, we were really young then. We thought why not? Then the last two times we thought ourselves this is a good opportunity for a new band, we can show ourselves to the people and producers and stuff like that. We have a background: We have a live band, our own songs, we have been performing in festivals, musical events, we have something to show. Actually Eurovision was the only thing we hadn't yet done in Latvia as we have been to every TV-show, played all clubs and arenas. This is the last thing, the top thing to do.
Is the Latvian national final a good platform to make yourselves even better known in Latvia?
Yes, that's why a lot of new bands try to get in. But it's only a good start if you have a good song and win but it's only a start. It's not enough, you have to earn your credits afterwords.
But now you made it to Eurovision and an international audience will get to see you. What do you hope to gain with that in a long run, do you have some plans in your mind for the future?
We are like athletes, we have to win, we have to be motivated to win. We hope to get some contacts and perform outside Latvia even more. We do it a lot already since five years. In the past two we have been doing festivals a lot, Lithuania and Estonia mostly....
So you are hoping for some Lithuanian and Estonian votes then?
Yes, if we get to the final! Ha ha!
You had two songs in the Latvian final this year, Sad trumpet and Here we go. Did the right song win?
Hard to say which one was our favorite. Sad trumpet is a jazzy mood song and we don't think jazz and Eurovision mix that well.... Songs are actually like babies, you can't tell which one is better.
In the 1960's there were a lot of jazzy songs in Eurovision....
Ha ha ha. In the 1960's! Right now we just wanted to have a fast song in Eurovision as most of them are slow. We think also it's great Eurovision is in Sweden this year as there are so many great music producers.....
So you are hoping some producer right for you would notice and contact you?
Yeah, for sure! That'd be awesome. 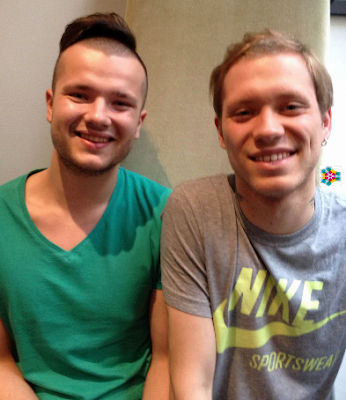 What are your hobbies and interest outside music?
Ralph: I watch wrestling a lot! I think everyone should have something that is nonsense to do just to relax. I watch it a lot and I can also learn a lot as it's a show.
But you only watch it, you don't wrestle?
Oh no, ha ha. I'm skinny! And I'm not that strong, ha ha! I'm not that sporty. I love sports but only to watch: I can play some football, I love football. I can play some very bad basketball. I'm into sports. I read a lot about sports, I know a LOT about it.
Edmunds: My hobby is cars. I love everything about cars. I like to drive them, I like to look at them, work and fix them.....
Ralph: When he fixes cars he only breaks them..... ha ha ha
Edmunds: I like dangerous things. I reduce my car into very bad condition and then I drive it. Very fast.
How many speeding tickets have you got so far?
Actually only two!
Ralph: He's the slowest BMW driver in Latvia. If you have a BMW in Latvia it means you are fast driver but he's the slowest! When the word got out he got his all the other BMW drivers in Latvia sold their cars.... Ha ha ha!
If you hadn't picked music as your professional, what would you be?
Ralph: I would be a writer! In some form.
Edmunds: I would propbaly be a very bad rally driver.... Or a taxi driver!
Let's go back to Eurovision. You are wearing some very glittery outfits and will dive to the audience and so on in your performance. Can you tell as bit more, will there be changes from what we saw in the rehearsals?
The first dive in the Eurovision history will come from us, from Latvia!
Are you always sure someone is going to catch you?
No, not always! Ha ha ha! I need some danger in my life, he drives so slow.... Anyways, one journalist said he doesn't get the idea of our act and let me tell you: there isn't it! We just do stuff! Of course here we have to follow certain rules for the cameras but there's enough space for improvising, to bring in the festival feeling.
What is your favorite Latvian Eurovision song?
We both like Intars Busulis and Probka.  I love that song because it was true, it was him. It's just what he does; pop mixed with some psychedelic jazz, he sung it really well but propably 90% of the Eurovision viewers didn't get it but he sung it from the heart. I was really proud of Latvia that year. I think it's better you send a song that really represents the artist than a song especially made for Eurovision...
Who would you like to see on Eurovision stage for Latvia next year?
That's a good question. We have a folk rock band called Skyforger. I think it would be a good choice because they have folk songs, Latvian songs mixed with heavy metal. That would be a great thing to have from Latvia! Then we have a group called Instrumenti, or Gustavo, a really good Latvian rapper.
Ok, talk with them! Thank you for this interview and good luck next Thursday and hope to see you in final!