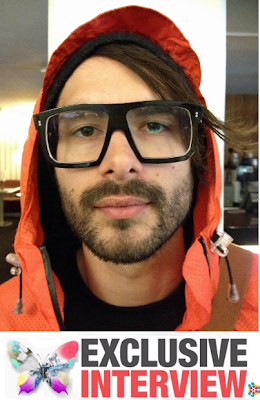 Hungarian hipster popstar Alex Márta aka ByeAlex is the next one being interviewed by the Bicycling reporter Robert in Malmö 2013. Alex might be a man of few words but certainly he is a very interesting personality. Tattoos. Philosophy. Music. Metal band. Book. Gym. Is he too pop? What about humanity? And guess what? He's Eurovision virgin! 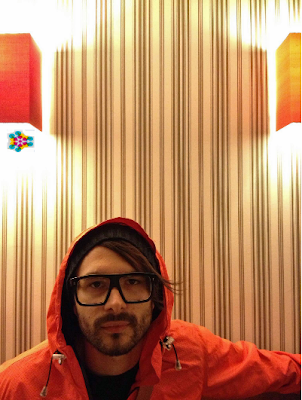 Thank you Alex for this interview. Why ByeAlex?
There's really no answer to that.  I used to say "pa" all the time which some find very annoying, so somehow it became ByeAlex...
So you like to be annoying at times?
Yes! Ha ha
How long have you been using this name?
1,5 years...
So that's also how long you have been in the music business.....?
I always liked music. At 16 I started making music but not very seriously. I started taking it seriously only in the past five years or so. I started making electronic music, metal... and the ByeAlex project is about 1,5 years old. My real job is journalist, used to be music journalist but now I'm editor in a tattoo magazine.
And you got known in Hungary because of A Dal, right?
Yes.
You also studied philosophy. Did you finish your studies, got a degree and all?
Yes, I did.
How do you combine philosophy with music?
I don't think I could write this kind of deep lyrics without studying philosophy before. They thought us how to read first, then to write. I'm trying to incorporate all that in my music.
So you are planning always to write your own lyrics? And not to use text by other people?
No, never.
Kedvesem, The one 4 me, sounds very poetic already like that. Is that why you decided to keep it in Hungarian? Do you think it sounds better?
We kept it in Hungarian as it means more to me, it's lyrics I've written, it's my language. The English translation is ok but it doesn't seem as deep to me as the original one. It's more poetic in Hungarian.
When you will be singing on this Eurovision stage, will you be mainly singing to the Hungarians or the wole of Europe?
I sing to all people are open to receive my song. I listen often music I don't understand the lyrics but I still can feel it. I hope this audience will experience the same thing.I'm proud to be singing in Hungarian now as most Hungarians before me have sung in English.
You wanted to do something different?
Yes. 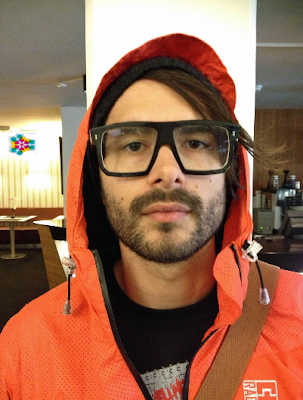 Who is Alex Márta outside music business. Your hobbies, interests. besides philosophy..?
I really like to go to the gym... but music is also my biggest hobby, I have many projects besides ByeAlex, metal band for example... and I try to write a book.
And your near future bands besides writing the book?
I plan to release two CDs this summer, one by ByeAlex, the other by the other band, My Gift To You, concerts.... and writitng the book, it's about humanity and sosiology.
Are you happy to do Eurovision for Hungary? And what do you hope to gain from it?
I have a little mixed feeling about what I'd like to achieve. But I hope to get to the final and I'll be satisfied. For my country and for my language. On the other hand I wanted to make myself a name in the underground scene and suddenly I'm here and very pop, ha ha! Not quite sure if that's a good thing or not!
So maybe after Eurovision you go back to underground?
Maybe!
Did you follow Eurovision before or is this totally new to you?
I only saw the Hungarian final last year because one of the bands on my record label was there, and they won. I haven't seen any Eurovision song contests.
So your favorite Eurovision song must be Compact Disco's Sound of our hearts then?
Yes, ha ha ha! But I really liked Magdi Rúzsa's song, too.
But who would you like to see for Hungary in Eurovision 2014?
Hmmm, DJs Soerii & Poolek!
Thank you Alex for this interview and good luck next Thursday, see you in the final!

I was happy to see him do well at the contest. His song remains one of the most played on my ipod :)
22:37

14.9.09
Regina Lund's new video Jag är osynlig was censored by Youtube only minutes after it had been uploaded. In the video she was playing a female Jesus who gets crusified in the end. "I was shocked!" she says. "There's nothing more naked in it as in every church! It's ok to have naked man hanging on the wall but my nakedness is too much on internet? ". Oh well, no comment. She's prepairing a new album Dare Regina Lund and we of course remember her from her Melodifestivalen 2007 adventure with Rainbow star .
Post a Comment
Read more
30.6.15
Post a Comment
Read more

24.4.21
One of the true Italian music legends Milva has passed away. Besides her immense international career she also holds the record of Sanremo festival presences: 15. No other artist, male or female, has done 15 festivals solo. She also holds the record of consecutive participations: 9 (from 1961 to 1969. Her last participation was in 2007. Born Maria Ilva Biolcati in summer 1939 she won a contest organized by Rai in 1959 for new voices and the rest is history in Italian pop, German schlager and French chanson. Add theater, films, television, Brecht, Morricone, Battiato, Theodorakis, Vangelis.... She has recorded and releases a total of 173 albums, another record for an Italian artist, in various languages when counting studio (35), live and various compilations. She met success especially in Germany but also France, Japan, South Korea and Latin America.  To this blogger personally she's known thanks to her collaborations with Franco Battiato, and obviously Sanremo. of those entries my
Post a Comment
Read more

7.7.12
Well, almost. The boys celebrated their 650.000th follower on Twitter by being photographed fresh from shower as promised. It's not the first time they drop their clothes as you see here . Meanwhile their second album is nearly here and the title track Young love is hitting the charts....
Post a Comment
Read more