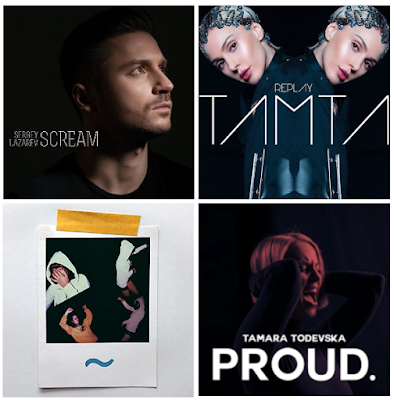 Some more entries that occupy the lower parts of my personal ranking.
Russia - Sergey Lazarev - Scream **
But tears aren’t quiet things They scream
I was rather pleased when it was announced Sergey (36) would return to Eurovision. I was never crazy for You are the only one even if it was rather nice harmless pop, but I have always liked Sergey in general. And Scream in his repertoire is just about the worst of all I have heard. I understand he wants to show another side of himself but this is tiredsome musical number. Certainly it will be nicely staged and all but as my ranking goes based on "would I listen to this outside ESC"? the answer is clearly a big fat No. On the other hand it's a clever move as he has a back up when he doesn't win: The song was too good/different/difficult for Eurovision. Yeah, whatever. This is simply boring. Save these songs to musicals you do and give us some real Russian pop!
Czech Republic - Lake Malawi - Friend of a friend ***
There’s not much between us now D’you know what I mean?
Lake Malawi has been around already for half a decade, or 300+ gigs home and abroad, and they are Albert Černý (lead vocal, guitar), Jeroným Šubrt (bass and keys) and Antonín Hrabal (drums). The song's kinda nice when I hear it but when I don't I hardly remember it exists. Harmless and forgettable but on the brighter side it's different in sound! Hipsters go 80s kind of a way. This could do reasonable well if it makes past the semi final, or go nowhere at all. Propably juries will push this to the final and then.... we will see!
Cyprus - Tamta - Replay ***
Replay replay replay yeah
Georgian born Tamta Goduadze (თამთა გოდუაძე/Τάμτα Γκοντουάτζε, 38) has been on Eurovision radar for years and like Sergey, she didn't deliver. I loved her With love but this Replay is washed down version of Fuego, that I never really liked either. And Tamta doesn't have the presence of Eleni that made Fuego a runner up last year. When Eleni came across as fierce and sexy, Tamta seems a housewife lost in a cosplay. Uninteresting manufactured and over studied pop, luckily my same authors or otherwise we'd meet them in court. Maybe juries will punish the effort but televoters won't remember a thing. Propably juries either and Cyprus sails to the final, and somewhere on the mid table on the left side....

North Macedonia - Tamara Todevska - Proud **
Tell them Raise your voice and say it loudly
Tamara (33) is a real Eurovision veteran but it's her first time being alone in the spotlight. The back story and dedication of the song to her kids and all that is sweet and nice, but this empowering anthem doesn't touch me in any level. Maybe I'm not in the target group? And I have no idea how this will end up, at the momemt I think we won't hear this in the final, but let's wait and see the staging and performance, this could be one of those songs that come alive live....Maybe.