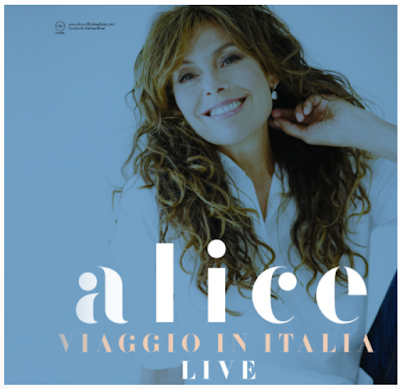 Back in the 1980's Alice made it big in Germany and all the way to the 1990's she toured not only Germany but also Scandinavia and Finland, Benelux and of course also other German speaking countriess Switzerland and Austria. It's 2019 and she tours Germany again! This blogger crosses fingers it's a start of a longer tour that would reach further north later on...
Viaggio in Italia is based on her 2003 album on the same name where she covers meaningful songs from Italian cantautori, or singer-songwriters like Franco Battiato, Lucio Dalla, Fabrizio De Andrè, Francesco De Gregori, Giorgio Gaber, Ivano Fossati, Lucio Battisti, Giuni Russo and herself of course. She's been touring Italy on and off ever since with occasional concerts, and new songs have been added to the line up including old classics like Per Elisa and Messaggio - by public demand. She will perform with Carlo Guaitoli (piamo and keyboards) and Antonello D'Urso (acoustic and electric guitars and programming).
Her latest studio album is Weekend (2014), that followed Samsara (2012) - her first studio album in 14 years!

If you are a fan, a must visit! Below are the dates and you can get tickets here