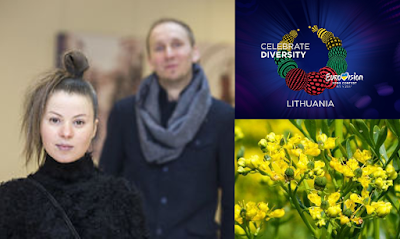 
Fusedmarc won the 11 week long national selection process starting as an outsider but getting better results every time they performed (4th, 3rd, 1st). In the final they won both the televote and the jury vote resulting in a convincing win and leaving the fan favorites home. Their song Rain of revolution is written by Denis Zujev, Viktoria Ivanovskaja and Michail Levin.

Fusedmarc is an alternative electric pop group with a strong visual image made of lead vocalist Viktorija Ivanovskaja, multi-instrumentalist Denis Zujev, and visual designer Stasys Žakas. Their debut album - and the only one so far it seems - was released in 2005 and earned them an award as the breakthrough artist of the year. Other awards have followed and they seem to be considered some kind of pioneers in what's fresh and new in music in Lithuania. Over the years they have performed all over Europe.

The song is a strong contrast to how the band describes itself, as new and fresh and alternative. The song is a retro pop straight from the 80's, nothing new, nothing special. Been there, heard it. In the 80's. It has it's moments and nice rhythm, and Viktorija's experience on stage shows. For some reason I'm thinking of latest Madonna productions and her love revolution propaganda. And I prefer her. 2/10