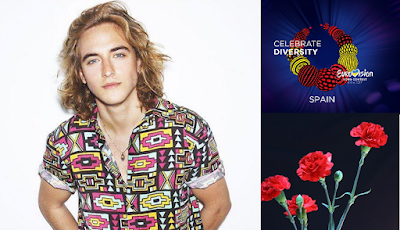 Spain's national final Objetivo Eurovision didn't lack drama. There was a share of it already in the online Eurocasting phase but the real drama came in the final where Manel and Mirela first finished with the same points (why this always happens in Spain?) and then the three judges decided on Manel, only that one of the judges maybe was a bit too close to Manel to be there in the first place. He re-performed his winning entry amongst booing and people walking out of the studio, and apparently even gave the finger to the audience at some point. The whole drama ended up even in the parliament.... But here he is. Not immensely supported by the heated Spanish fandom. Do it for your lover is written by Manel himself with Antonio Rayo

Manel (21) shot to the fame from a local talent show, Catalunya Teen Star, where he earned a recording deal and released his first single in late 2014. Next year he was signed to Sony, released second single that went to viral #2 in Spain and by then he already had a lot of screaming teenage girls as fans. He's yet to release his debut album, and the Eurovision (jury) vote rigging accusations and the whole affair hasn't maybe really played for his favor at this point.

So, is it worth all the drama? No. I find his voice and vocals quite weak to be honest. The song is rather irritting and annoying guitar pop that will secure Spain another 20something placing in the final. (And no, I wasn't in #teamMirela)  It goes on and on going nowhere and developing into nothing. A wasted year again for Spain. 2/10

Email ThisBlogThis!Share to TwitterShare to FacebookShare to Pinterest
Tunnisteet: #objetivoeurovision, do it for your lover, eurocasting, eurovision song contest, manel navarro, mirela, Spain