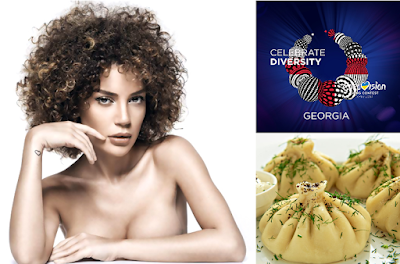 Pictured khinkali, Georgian dubling in absense of any national flower

Georgia was one of the first countries electing its represant and song this season. The national final on January 20, 2017 in Tbilisi featured 25 entries chosen from an open call, and the winner was chosen by international jury-televote.

Singer, songwriter and actress Tako Gachechiladze (34) won with the self penned Keep the faith. She already almost got to Eurovision in 2009 being then part of the winning team Stephane & 3G with We don't wanna Put in, the song that was withdrawn/disqualified in the middle of the Russian-Georgian war and Putin being the prime minister at the time. She also participated in the national final in 2008 placing 10th. She kept the faith and is back now - again with some more or less hidden political statements, in the backdrop at least.

The song is a typical Disney ballad with very American style motivated lyrics, apparently aimed at women to be strong, believe in themselves and not hide behind a veil among other things. She's quite a strong performer as well and maybe can really nail it live when it matters but.... I find this bland and boring, it doesn't touch me at all in any level. Forgettable and uninteresting and therefor from me only 1/10 and a yawn.