BLOGILKAR EXCLUSIVE INTERVIEW: THE PARODY GUYS AND THE MARRY ME VIDEO! 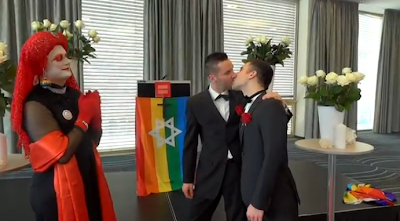 Every Eurovision fan knows by now Dekel and Bastien, the Parody Guys! This couple has provided as fun and joy already three years and this year they are back. And the chosen one is the Finnish entry Marry me (again) and the videos has been shot all around the world, from Helsinki to New York, from London to Amsterdam, Tel Aviv, Stockholm and all the other places! Are you ready to get married?! Here!

Can you tell us a bit about yourselves. Dekel from Tel Aviv, Bastien French living in Zurich. How do you do it? How do you manage with your international live style?
We both travel a lot, either for business or pleasure, so we are often in each other's city, or meeting somewhere around the world!
Where and how did you meet?
We met in a bar in New York back in 2006. We were both airline crew members on a layover there. Dekel still is one, Bastien has changed his career since.
Aha, we can blame it on Lordi then! How many Eurovisions have you done already? I suppose you will be in Malmö 2013 as well?
Malmo will be our 5th. Looking forward to it!
Why Eurovision?
Dekel has been following the contest since childhood. In 2008 we went together to watch it live in Belgrade and Bastien has fallen in love with the contest too, right away. It has been a mutual hobby of ours since.
Back in 2009 you did a parody, or should I call it a funny holiday video of Les Jardins de Monaco. How did you started with that? Did you think it might be a first step to something bigger and lasting?
That was really just a silly holiday video meant for our friends to watch. We have done it mainly as Les Jardins de Monaco was playing in my head before we went there on vacation. There were no intentions back then to turn this into an annual production.
And then came the video for Kuunkuiskaajat's Työlki ellää in 2010 that went viral and the girls themselves were among your biggest fans. You also met them in Oslo. How that came about? Why that particular song and the idea to make a video?
That song is pure fun and funniness. We never thought this video would go as far as it did either, as it was just us being silly eurovision fans, but the experiences to follow after were amazing. The girls are absolutely adorable and we had a lot of fun together with them in Oslo. We still keep in touch from time to time. After that video went viral and was featured in so many places, we knew we had to turn this into a tradition.
In 2011 you chose the Swedish entry, Popular by Eric Saade. That was pure funniness! Did you ever meet him and do you know if he approved?
We haven't got to meet Eric in Dusseldorf, though we've been told he asked about us before we arrived in the city. He has been interviewed about our video though, and seemed to be very amused by the tribute.
In 2012 you went for more serious stuff doing Russia's Party of everybody celebrating tolerance and acceptance in every sense immaginable. The grannies also approved. When did you realize you could also prmote something more serious with these parodies?
After our videos have reached more than half a million views, we thought why not use them to promote love and tolerance, which apart from being our beliefs, are also the ideas behing Eurovision. We were featured in several gay magazines in Russia, which means a lot, knowing the troublesome situation of homosexuals there.
And now 2013 it's time for Finland again, Marry me by Krista Siegfrids! Turned into a equal marriage support video, something very close to Krista's heart already (Tahdon2013 campaign in Finland) The video includes bits filmed all over the wolrd by fans. Tell us more about the initial idea....
Following last year's concept of promoting love and tolerance, together with the ongoing marriage equality campaign around the world, we have decided to go back to our Finnish parody roots and make a gay version of Finland's awesomely fun entry. The song's title is perfect for the cause, and the main idea consists of taking Krista's love story and turning it gay. Along with that, we have gathered friends in different cities doing the ding dong dance all over the world – just like love and marriage should be equal to all, worldwide.
Will you marry? :-)
Wait and see... :)
Thanks Dekel for the interview!


Ladies and Gentlemen... 250 video shots, 160 participants, 11 cities around the world, and 2 crazy crazy us.  We give you the biggest and wildest Eurovision parody yet, dedicated this year to marriage equality. Here it is!