Eurovision vote is a matter of national security? WTF? 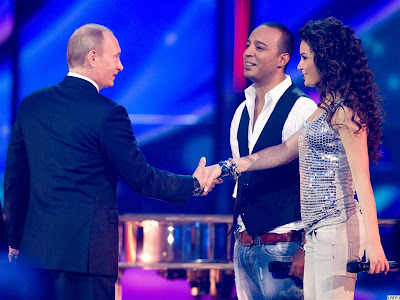 How would you feel if you were interrogated for your simple vote in a song contest and accused of putting in danger the national security? Absurd as it seems it has happened in Azerbaijan! Some folks seem to forget its just a simple song contest and politics should be left out (even if Putin did go and meet the Azeri artists in Moscow as pictured above). Even Turkey, Greece and Cyprus vote each other these days but further east things aren't so simple with the new comers it seems. Armenia debuted in 2006 and Azerbaijan 2008.
"Rovshan Nasirli, a young Eurovision fan living in the Azerbaijani capital Baku, says he was summoned this week to the country's National Security Ministry -- to explain why he had voted for Armenia during this year's competition in May.
"They wanted an explanation for why I voted for Armenia. They said it was a matter of national security,” Nasirli said. “They were trying to put psychological pressure on me, saying things like, 'You have no sense of ethnic pride. How come you voted for Armenia?' They made me write out an explanation, and then they let me go."
A total of 43 Azeris voted for the Armenian duo Inga and Anush, and their song, "Jan-Jan."
Read the whole story here: http://www.rferl.org/content/feature/1800013.html
This related story might be also worth reading: http://www.rferl.org/content/Eurovisions_Nationalism/1734165.html

7.7.12
Well, almost. The boys celebrated their 650.000th follower on Twitter by being photographed fresh from shower as promised. It's not the first time they drop their clothes as you see here . Meanwhile their second album is nearly here and the title track Young love is hitting the charts....
Post a Comment
Read more