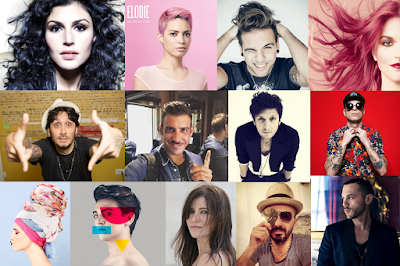 The 67th Sanremo festival has 22 Big artists. Let's have a look at some interesting facts.
The oldest is Albano (73) and the youngest Alice Paba (19)
There are seven debutants:
Alice Paba, Michele Bravi, Raige, Giulia Luzi, Ludovica Commello,
Sergio Sylvestre and Elodie
Most debutants are from various reality talent shows:
Alice Paba - the Voice of Italy winner 2016, Michele Bravi - X Factor 2013 winner,
Sergio Sylvestre - Amici 2016 winner, Elodie - Amici 2016 runner up and Giulia Luzi made herself a name in Your face sounds familiar
Talking about Amici 2016 - the whole top-3 is in Sanremo as besides Sergio and Elodie also third placed Lele is among the Newcomers
There are four previous Newcomers amongst the Big this year:
Michele Zarrillo (1987), Marco Masini (1990),
Fabrizio Moro (2007), Francesco Gabbani (2016)
Three previous winners are in:
Albano (1984), Ron (1996) and Marco Masini (2004)
There are seven debutants but there also seven real veterans:
Albano for the 15th time, Zarrillo for the 12th, Turci for the 10th, Masini for the 8th,
Ron for the 7th, D'Alessio for the 6th and Mannoia for the 5th.
With his 15th Sanremo Albano joins Milva, Toto Cutugno and Peppino Di Capri
as the one with the most participations
Besides his seven times as artist Ron has also written seven other songs for the festival
Besides his six times as artist D'Alessio has written five other songs for the festival
Some artists make a comeback to the festival after a long time:
Mannoia back since 1988, Samuel back since 2000 (then with Subsonica)
and Turci backs since 2001
From last year we have back Berbabei and Clementino
and Gabbani and Meta who now move from Newcomers to Big.
Only one Eurovision veteran in the cast: Albano

Check out some of the Big artists videos after the jump...