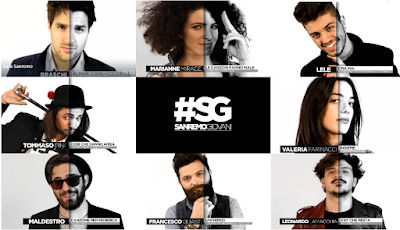 Last night was full of tears and drama when the eight Newcomers finalists for the 67th Sanremo festival were selected. Twelve songs out of 561 had made it this far, and they were first cut down to eight by four duels of three - each jury member had to pick up one to eliminate from each trio.
The remaining eight were then put in another test as the jurors had to put them in order in a secret vote and two more had to leave at the very moment. Those two were Chiara Grispo and Valeria. (Carola Campagna, La Rua, The Shalalalas and Aprile & Mangiarancina were eliminated in the first round. )
Those two were replaces by two entries from the AreaSanremo selection. Originally they were 414 and a jury had selected eight for another jury to pick up only two.

Here they are with their entries that are already out while the Big ones will be heard for the first time when performed live in Teatro Ariston in February. It's worth remembering one of these could end up the Italian entry for the Eurovision song contest 2017 in Kyiv....