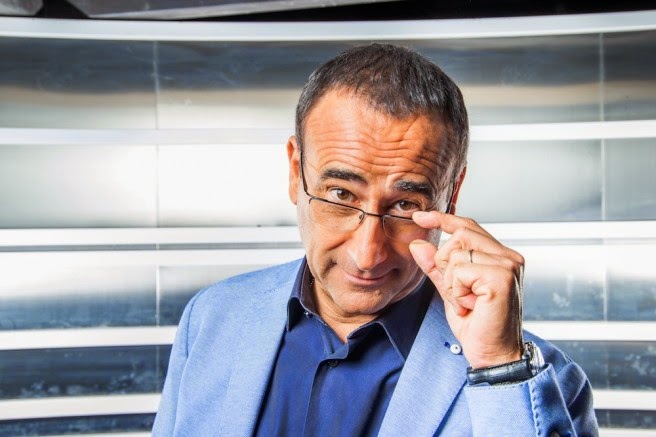 As we know now the 65th Festival di Sanremo will be used as the selection format for the Italian entrant in the Eurovision song contest - for the first time officially since Italy's return as it is written in the rules. The winner will be the first choice (but not necessarily the winning song).
But how does Sanremo work? It may be a bit confusing affair for those who haven't been following it for years (and sometimes even for us who have!) I try to spell it out in a simple way.
The songs by Big will be first heard only when they are performed for the first time on stage in Teatro Ariston while the Newcomers songs will be played in Radio2 already in January to make people familiar with these new artists and voices. Only songs in Italian (or local dialects) are accepted fro Sanremo.
And if you thought staging Eurovision costs, RAI spends 16,5 euros for Sanremo 2015 but hey, that's down from last year's 18!
Five nights of votings by different groups and categories and nights of celebrations of old songs.... And don't forget countless guest stars each night; Italian and foreign singers, comedians, politicians and only Conti knows what. It all can get a bit confusing to all of us but ... And get ready for long nights, the timetables are only valid on paper, in live broadcast anything can happen (and does, remember the orchestra protesting about the results a few years back?). As it is all live on Raiuno every night. Hopefully next year they also get the webcast working abroad as so far it hasn't been the case.

There are two categories; Campioni aka Big, and Nuove proposte aka Newcomers. There are 16 Big and 8 Newcomers running for the victory in their categories.

Third night - February 12, 2015
The new songs are forgotten* by the Big for one night and they will sing covers, Italian or foreign but in Italian. They can invite Italian or foreign singers to join them on stage for this occasion. There is a voting 50-50 by televote and press center and a special award will be given to the winner of this night. (*they might sing a snippet of their entry but that's not sure yet... propably not as it would become a looooong night!)
The four Newcomers that qualified for the semifinal will meet each other in two direct duels with the 50-50 televote-press center voting. The winners will go to the final.

Fourth night - February 13, 2015 - THE NEWCOMERS FINAL
Big. This is when voting gets more complicated and things more interesting. The voting is in three parts: 40% televote, 30% expert jury, 30%  demoscopic jury. All this is added to the votes of the First and the Second night and in the end four last placed songs will be eliminated, sending only 12 songs to the Grand Final.
The Newcomers final. The two artists will perform their songs and will be voted by the 3some (40% televote, 30% experts, 30% demoscopic) and the winner will be declared the winner.

Fifth night - February 14, 2015 - THE GRAND FINAL
The 12 songs that made it to the Grand Final will start from a zero, all previous votes have been cancelled. The voting is again a 3some: 40% televote, 30% expert jury and 30% demoscopic jury. The Top-3 will be announced only and these three songs will be reperformed, voting zeroed again and the already familiar 3some voting will take place with same percentages. In the end the ranking will be revealed and we will have a winner and hopefully the Italian entrant in Vienna!

Besides that various other awards will be handed out for the best composition, the best lyrics and so on. More the merrier!

2.1.15
Another year has passed and I can't but thank you all who followed me, read me, and in some cases looked at the post photos only. That's the case - I suspect - with the most read post, Serebro's naked photo must have something to do with it :-) Maybe that's the case also with the second most read one, as surprisingly it's the lyrics of Mikko Pohjola's UMK 2014 runner up Sängyn reunalla that came along with its tastefully bare video. And yes, also the third one might be helped by the photo, Twin Twin wearing nothing but their socks.... Finally at number 4 we have someone fully dressed up, Valentina Monetta's honest and bare confessions of her three Eurovision adventures as chatted in San Marino this summer at her house. At number five we have them again, Twin Twin. Naked again. I'm starting to worry about you readers.... or should I worry about my own editorial skills? Number six is quite a surprise, a Greek friend of Alkaios or Iakovos Gogua from the E…
Post a Comment
Read more

22.1.13
Update! Another thing got Swedes talking last night: Carola's boobs when she was giving away an award. This is not the first time her boombs cause headlines; her misfortunate adventures in the 80's in Japan wer explained with her boobs being too big for Japanese market. Ok.... Or was it the song? Anyways, Carola apologies and says she thinks the dress is stylish and elegant (even her friends said so) and she's a mature woman in her 40s, not a 16-year-old girl and looks like one.
The Swedish Oscars, Guldbagge awards were given out last night. Carola was there as a guest star to sing Barbra Streisand's The way we were when honoring the movie stars who passed away during 2012. However, the cameras were too much on Carola, not on the stars showed in photos in the background and that upset many viewers as that part of the show was to celebrate them, not Carola. Oh well...  The producer of the show tells in Aftonbladet the part of the show was made the same way last year…
1 comment
Read more