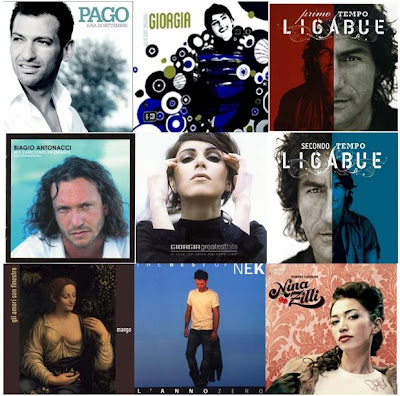 While in Italy I obviosuly had time to visit some recordstores and bought this and that. First a real bargain, Pago's second album for 0,90 euros! Well, it's maybe worth a bit more but compared to the first one it's rather lame offering. Ti ricordi saves the album but it also includes Love my love and  Un'estate fa. (The debut included jewels like Parlo di te e Non cambi mai....). I also bought Nek's greatest hits cd including songs like Almeno stavolta, Laura non c'é, Sei grande, Se una regola c'é, Sei solo tu e In te. I have always liked him but this is actually first album by him I bought. In sales I admit. Then a very pleasant surprise my Mango: a double live cd including his greatest hits like La rondine, Nella mia cittá, Bella d'estate, and many more. Incredible voice and beautiful songs. And over 25 years of memories! I also got Biagio Antonacci's Mis canciones en espanol, including Iris, Cuánto tempo y aún sigues and Si tu estas. His songs sound good in any language, even Finnish. I also got Nina Zilli's album that includes her OGAESC 2010 entry L'uomo che amava le donne as well as 50mila. Then I got two albums by Ligabue, a rocker I have been flirting with for years but never bought anyhting before. Must be all that driving around Lazio and Toscana and listening him at the car that finally made me a fan? (Or was it Virgi?)  Piccola stella senza cielo, Balliamo sul mondo and Metti in circolo il tuo amore are amongst my favourites. Last but least a real bargain: six Giorgia albums in a box for less that 25 euros, from her debut in 1994 to her sixth album in 2001 with fantastic Sanremo tracks like E poi, Come saprei (#1), Strano il mio destino (#3) and Di sole e d'azzurro (#2) and my personal favourites like C'é da fare, E c'é ancora il mare, Sueno latino and like that wasn't enough I also bought her greatest hits Le cose non vanno mai come credi in sales including fantastic Marzo.What a fantastic vocalist she is. If she only could do Eurovision (like she deserved already back in 1995)
A lot to listen. Something new, a lot of old but filled with memories.....
Lähettänyt Ilkar Blogilkar klo 18:14