From A to A: Amadeus meets Alexander - Is sleep better than sex? 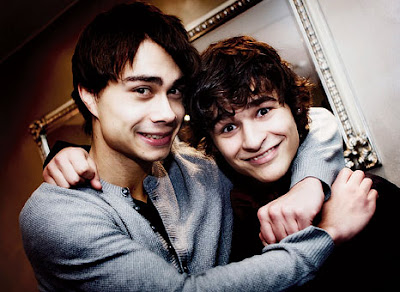 Eurovision 2009 winner Alexander Rybak met the possible Eurovision 2010 winner Amadeus during his recent trip to Finland. Helsingin Sanomat was present and interviewed both of them together. Here are some bits from it:

Amadeus keeps talking. He is very excited to meet Alexander. "I've heard we look alike" he says, "but our noses are different, so are the eye brows. He has thicker ones and besides my nose is a hook while he has a straight one". Record company has arranged this meeting before Alexander's performance in Helsinki but he is late. A little bit sick they say. When he finally arrives he looks tired and uninspired but then eyes Amadeus with surprise. "Oh my, we do look a bit alike! But you have so much more energy. You will see that more fame you gain and more autographs you sign more you have try to stay calm."

Then Amadeus plays him his entry Anastacia. Alexander listens and slowly his feet start to hit the beat and a smile crosses his face. "Wow, you really have a deep voice! This is very international. I like the music but I don't understand the lyrics of course." Well, Alexander, will Amadeus win? "In Eurovision the voice means nothing. Melody and attractive artist mean something but it's all about a concept" he says. Alexander says an artist must ask himself why he wants to do Eurovision. "I noticed only about 10% of the artists were self confident on stage because they knew why they were there and what they were doing." Amadeus thinks a moment and says "Maybe the meaning of life is to bring love and happiness to the people through music?" Then he starts to talk about money, how they pay him too little for his gigs. Alexander looks a bit embarassed but then admit he just lost 50.000 NOK for the concerts in Oslo while his agents gained 300.000. "When I won in Moscow I told NRK I won't be flying around like Dima Bilan in Oslo. Recently I found out they have already decided what I will do without consulting me. I asked them if they really think I will agree to do whatever they make up?" he concludes angrily. The two stars end up discussing their contractual problems and the atmosphere gets quite hot. Better change subject....

Alexander says Amadeus should not limit his life in fear of the tabloids. "This is a period in life I can date many girls. I don't want to end up 50 having been married for decades and then regret I didn't go out. I'm honest to everyone and do all I can to be able to live a full life" he says. This morning Alexander woke up in Oslo 6.30 next to "some girl" he says. "Life's horrible when you have to wake up at 6.30. Maybe sometime soon I can wake up at 11. Sleep is better than sex!". Amadeus agrees and says to Alexander he should rest more. "Of course" he answers very tiredly before he is rushed away to his concert.

Amadeus is still all excited about the meeting. "When I win we can be best friends" he plans. "We can do gigs together! But I can see he was tired. You can see it. You can feel it. You can see he has no control over his life but runs in all directions. He needs people around him who think about his well being...."

2.1.15
Another year has passed and I can't but thank you all who followed me, read me, and in some cases looked at the post photos only. That's the case - I suspect - with the most read post, Serebro 's naked photo must have something to do with it :-) Maybe that's the case also with the second most read one, as surprisingly it's the lyrics of Mikko Pohjola 's UMK 2014 runner up Sängyn reunalla that came along with its tastefully bare video. And yes, also the third one might be helped by the photo, Twin Twin wearing nothing but their socks.... Finally at number 4 we have someone fully dressed up, Valentina Monetta 's honest and bare confessions of her three Eurovision adventures as chatted in San Marino this summer at her house. At number five we have them again, Twin Twin . Naked again. I'm starting to worry about you readers.... or should I worry about my own editorial skills? Number six is quite a surprise, a Greek friend of Alkaios or Iakovos Gogua fr
Post a Comment
Read more