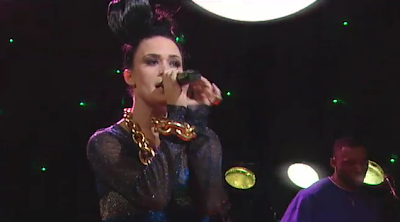 Martina performed her Checkmate last night in Maria! talk-show on commercial channel 4. Didn't she break the rules that say the songs can't be performed on any other than YLE's channels before the end of January? Do we have the first scandal of the season in our hands?
Watch her performance here. And no, she didn't quite convince this blogger with this performance. Where were the much needed backing singers?

UPDATE: UMK producer Anssi Autio says she didn't break the rules. "We are talking about demos now and we have encouraged the artists to promote themselves so Martina did exactly what we wanted to. The rules stand for the 12 re-produced radioversions for the finalists."
Lähettänyt Ilkar Blogilkar klo 23:11