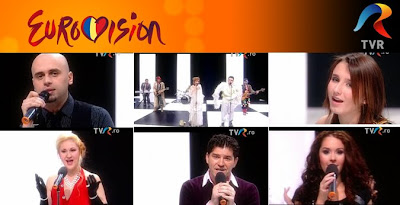 Romania's selecţia naţională kicks off tomorrow and you can see the preview vids here: http://www2.tvr.ro/eurovision/. I had a go and watched the vids and here are some comments. Unlike last year I don't have an instant favourite and it will be interesting to see what the Romanians like!

Zero opens the show with a middle of the road radio friendly pop-rock. The singer is very good and they come across good. Not bad at all. Last year's entrant Nico has teamed up with another national final veteran Moni-K and they offer a very dated, rather boring italodisco number. This might qualify, or then not. In the later case fans will propably shout for a scandal. It is much much better than the next one though. D.D offers a boring rock ballad from the 80's. Romeo Zaharia follows with self penned song that sounds suspiciously familiar? However it's very Melodifestival in all. His strong accent is the main negative thing about it. Next we have Floriana Pachia with a song from the American power ballad song book. She sings well and comes across very sweet but one can only wonder what Whitney, Mariah or Christina would make out if this? Alexa comes next with a bouncy girlpop with a catchy hook. This should do well I guess. She is followed by a very weird group of characters on stage with a very intense performance. This rock ballad by Popas band is very beautiful and easy to ear if you get over the sight on stage. However, one of the best songs here! If they looked weird next we have a real boy next door on stage. Juan Xavier looks like he just went to office but he sings very well (on record) and the song is quite beautiful and catchy. If he delivers live this Spanish ballad might get to the final. Tabassco comes across very much like Zero, another rock band doing a rock-pop ballad that isn't bad but is it good enough? It is pleasant but somehow I think Zero will be more convincing on stage with a better singer, too. Tina brings on stage some Balcan and ethnic sounds but ends up in a lot of noise, I'm afraid. I guess some people might go crazy for this, I don't. Another midtempo pop thingy follows with Dalma but it gives me nothing. Nice in a bad way. And I didn't like the staging. And here they come, the Blaxy Girls. Save the best for last. I really like this song and they have found a quite nice way to present it, too. Beautiful song that really fits her/them. I just hope she sings as well live as she sounds on record!

Six of these will go to Saturday's final and if it was up to me they would be Zero, Floriana Pachia, Alexa, Popas band, Juan Xavier and Blaxy Girls. But what do I know?
Lähettänyt Ilkar Blogilkar klo 15:06