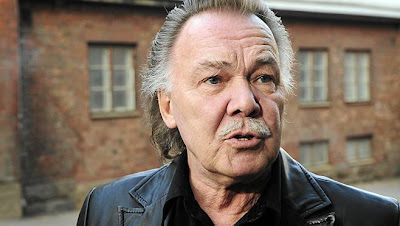 Finnish legend Kari Tapio (65) died suddenly in Espoo today. He came second in Euroviisut 2008 with Valaise yö. He has scored dozens of hits over the past 40 years. One of his most known songs in a cover of Toto Cutugno's L'Italiano, titled Olen suomalainen (I'm a Finn) that has become almost a national anthem.

Kari Tapio released his first album in 1974 but only his 7th album Olen suomalainen  in 1983 brought him his first gold album. In all he released 29 albums, latest being gold selling Vieras paratiisissa (2010). He has also released 15 compilations over the years and the album sales are around one million gaining his 19 gold discs, 9 platinum discs and one multiplatinum, Myrskyn jälkeen (1995). His only #1 album is Kuin taivaisiin (2007). He won iskelmä-Finlandia in 2003 and Emma for the best male artist in 2006. He's described for having the "Blue and white voice", just like Katri Helena, two real icons of Finnish popular music.

His passing has left Finns with shock. Front pages of all newspapers today are painted black and dedicated to him while his widow announced the memorial service will be open to everyone, in Tapiola church in Espoo on December 22, 2011 2pm.