Last but not least two ladies: Diana Rouvas and Jaguar Jonze. Diana (35) is the current winner of The Voice Australia, of clear Greek origin she's not afraid to underline, and has toured for years as Tina Arena's backing singer. Her song is titled Can we make heaven.
Jaguar is mixed Taiwanese-Australian, born in Japan filling in with the alternative indie slot in Australia decides. Her entry will be titled Rabbit hole.

Next up to talent guys for the line up: Jack Vidgen and Jordan-Ravi. Jack won Australia's Got Talent as 14 year old. Burn out and apparently several plastic surgeries later now at 22 he's aiming for  Eurovision after trying his luck in The Voice. His entry I am king, I am queen is below.
Jordan-Ravi (19) got his shot at fame not in  Australia but America's Got Talent. His entry will be called Pushing stars. 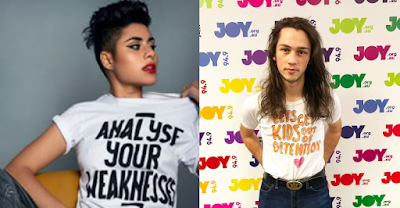 Two indie artists revealed next for the Australia decides Eurovision national selection 2020.
Montaigne (24) aka Jessica Alyssa Cerro is an art-pop singer-songwriter-musician. In 2016 she won the annual Breakthrough artist award and has released two albums so far.
Didirri, a singer-songwriter comes from an artistic backgrouod: son of a painter and a children's perfoemer used to be a circus performer himself before learning to play and write music. And he's a ABBA fan able to perform in an antimate setting or big festivals as well as on the streets.

Australia has revealed two more acts for Australia decided 2020 Eurovision and after two ladies we have two gnetlemen who like to dress up: Mitch Tambo and iOta.
Mitch Tambo (29) shot to the fame from Australia's Got talent even if he finished only 6th. He mixes traditional sounds and language with modern beats bringing the tradition back to life with a contemporary feel. His entry is Together
iOTA or Ssan Hape (51) is born in New Zealand of a Maori father and English mother but grew up in Australia releasing already six albums and starring in several musicals winning awards and nominations along the way.  Musically he has developed from hard tock to acoustic blues roots to electric rock. He has also starred in films like Mad Max: Fury road and The Great Gatsby. His entry is called Life

SBS has revealed the first two artists taking part in Eurovision: Australia decides 2020. The other ones will be revealed in later dates. Here are Vanessa Amorosi and Casey Donovan.
Casey Donovan (31) won the Australian Idol in 2004 at the age of 16. Since then she has released one triple platinum selling album, a couple of EPs and a string of singles and has won I'm a celebrity... get me out of here a couple of years ago. Besides being an icon for bigger ladies she's also a musical star. Her entry will be called Proud.

Vanessa Amorosi (38) is another well known artist in Australia. Her biggest gigs so far are the  2000 Sydney Olympic games opening and closing ceremonies. Five albums so far with 22 singles between 1999-2011 and a comeback earlier this year with a new album after ten years. She'll be singing Lessons of love.