FINLAND: UMK21 ENTRIES HIT THE CHARTS LIKE NEVER BEFORE 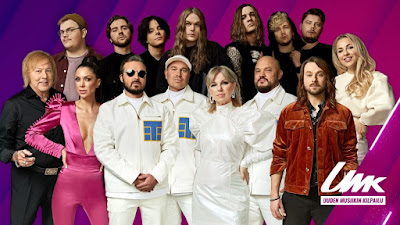 Something that has never happened before in the official Finnish charts history happened last week (and this week, too) when in the Top-6 we had three UMK entries. This week Teflon Brothers feat. Pandora keeps its n.o 2 slot where it debuted two weeks ago while Blind Channel drops to n.o 10 from last week's n.o 5 while Ilta rises to n.o 5 from last week's  n.o 6 debut. No sight of the other entries in the Top-20.

All the entries have made the Radio Play charts though. Two weeks ago Teflon Brothers feat. Pandora entered at 41 but  dropped out of Top-100 last week only to re-enter this week at 69. Debuts of two weeks ago Danny (70) and Laura (96) did not. Last week we witnessed the debut of Ilta at 47 but this weeks she drops to 82, Oskr debuted at 72 and Aksel at 100 last week but are now out.  Surprisingly Blind Channel is the only one having already three consecutive weeks, going up to 58 from their 67 debut week and bettering it to 57 this week. I didn't think that one so radio friendly at all.....