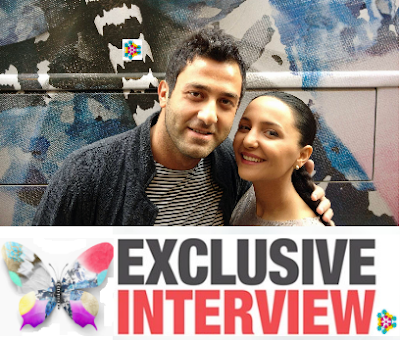 Today Blogilkar's Bicykling reporter Robert had a chat with Georgian Nodi Tatishvili and Sophie Gelovani and their very talkative spokesperson from Georgian TV. Who was first, the egg or the chicken? Or the duo or the song? Why Thomas Gson? Why not a Gerogian composer? Why he wrote a ballad? Did they get what they ordered? And will they mention even one Georgian name? Find out here: 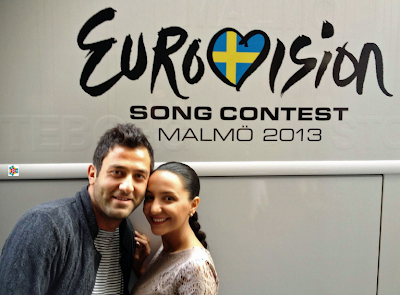 Thank you Nodi and Sophie for this interview. Since we are a Finnish website we don't know you two at all. Could you tell us a bit about yourselves?
We are singers from Georgia and we both are singing since our childhood. We have a lot of experience on stage as we have been doing this since we were 5-6 years old. As grown ups we have been to different international contests, done TV-shows. Despite all the projects we were not so well known even in Georgia. Only the people within music industry knew us well. In 2009-2010 we participated in Georgian Pop Idol and we gained some fame. Sophie participated in 2010 and Nodi the year before. We are talking in plural as "we" because our professinal careers have been very similar so far.
Nodi, what happened to you after you won Pop Idol, did you release a cd.....
Yes. I made an album with famous Georgian composers after that and many of the songs became hits. I also made several video clips and gained the support of Georgian population.
And what about you Sophie, did you win Pop idols as well?
I was a finalist and came second. But I gained a lot of popularity after this contest.
And now Eurovision! Where you specially formed as a duo to do this project? And what was first, the song or you?
In the end of December Georgian TV decided it would send a male-female duo to Eurovision and we were chosen. We are good friends and have been singing already together many times. Then the TV started looking for a song for us.
Waterfall was chosen but were the other songs in the running? Did you have a choice?
The TV decided not to look for songs but collaborate with a composer directly and take what he has to offer. There are many good Georgian composers but they decided to ask Thomas Gson from the song. 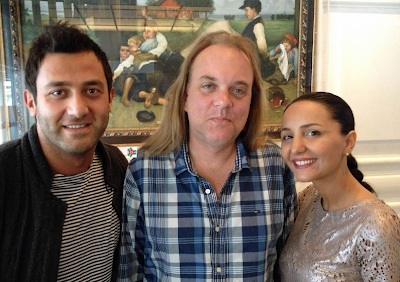 But why not a Georgian composer?
Georgia is a very small country and everybody knows each other in music business and the TV didn't want to favor just one of them and upset the others.
But you chose a very good one, the composer of the winning song last year! I have a feeling Georgia really wants to win this contest. So you think he can win it a second time in a row?
The Tv didn't ask him because he was the winner but because he's experienced and good composer.
And did immediately like the idea to write for Georgia?
Yes! Maybe you can't imagine it but we actually called him on the phone "Hi, this is Georgian Tv. Would you like to write an Eurovision entry to us?" and he was like "Yes, no problem!" Then we sent him Nodi's and Sophie's recordings and told him we wanted a ballad. He started to work and then came Waterfall.
So you told him you wanted a ballad?
Yes.
So Nodi and Sophie, when you heard Waterfall for the first time was it love at first sight?
Yes it was. We immediately realized it's our song! We were more than happy to perform this song even if it was of course only a rough version of the song. And the TV was very happy, it was exactly the song we wanted and had asked for on the phone and emails. This proves what a qualified composer Thomas Gson is.
Your voices fit very nicely together. Can we expect after Eurovision some more music from you together? Maybe a CD?
No, we will continue our solo career but yes, of course we will be suely singing together again time to time. We will always be each others favorite duet partners.
Any what are your future plans?
This is an exclusive for you: this winter will be singing a joint concert together in the conservatory, singing romances and classics with a big orchestra. At the moment it is only one concert but maybe there will be more....
Are you getting support from Georgia as the people didnät have a chance to vote for a singer or a song?
Yes, many people have come to us saying it's a good song. Yes, we feel the support by the people. The songs is played a lot in the radio as well.
Are you hoping that Eurovision will open doors to you to performd also outside Georgia? And what countries that would be?
All countries! Even Finland why not? In September we will do a little tour to sing for Georgian immigrants in Spain, Italy, France, Germany....
And will you collaborate with Thomas Gson some more? Other songs?
We would like that. We hope to collaborate with him, with pleasure!
Do you follow Eurovision?
Yes, we like it a lot and watch it every year. It's not only important to present the singers but the countries, too. It's a responsability of the whole country and a very good promotion of Georgia.
Doesn't it give an extra pressure to the artists to reach the final....
No, this not of course an extra pressure, no one will kill the artists if they don't get to the final. There's more pressure from the producers and the country than the TV. We love our country and this is not only for our future careers but for the country as well. We want to make our country know all over Europe and the world. Eurovision is a good platform for that.
Do you have a favorite Georgian Eurovision song?
We liked them all. I can't pick up one say it's better than the others.
And international?
Loreen comes to mind of course.
Who would you like to see represent Georgia in Eurovision 2014?
Ooh, we cannot say. All Georgians are singers and musicians, we can't name just one....
Maybe another Sopho then?
Yes, why not? ha ha ha!
Thank you Nodi and Sophie for this interview and see you next Thursday and then in the final!